Home / Food for thought / MEDITERRANEAN DIET – DOES THE GI MATTER?

The health benefits of a Mediterranean diet (Med-diet) are simply undeniable. But what exactly do we mean by a Med-diet and does it matter if the carbohydrates that are consumed as part of it are low or high glycemic index (GI)?

What exactly is the Mediterranean diet?

The traditional Mediterranean diet was originally found in the olive growing areas of Crete, Greece and Southern Italy in the late 1950s. In his 7-countries study, Ancel Keyes noted that coronary heart disease was uncommon in this part of the world in comparison to other nations at the time. He ascribed the difference to the amount and nature of the fat and its effect on blood cholesterol.

A Med-diet is not defined by any one ingredient – it’s not just the abundant use of olive oil – indeed, the oil could be any of a number of oils – and it’s not just the wine either (sorry!). There’s a useful food pyramid published by Oldways (1) that describes it well: 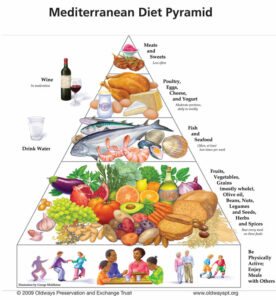 According to Jorde Salas-Salvado, the major characteristics are:

In a review of the scientific literature (2), a Med-diet was found to contain up to 9 serves of vegetables, 2 serves of fruit, up to 13 serves of cereals and 8 serves of olive oil. In macronutrient terms, that’s ~37% of energy as fat (and that’s a lot of fat) but only 9% saturated fat. Red meat and sweets are eaten occasionally.

What are the health benefits?

With so much fat, you would be forgiven for thinking it’s bad for body weight. But a study published in the New England Journal of Medicine in 2008 (3) reported higher weight loss on a Med-diet than a low-fat diet. Furthermore, among those with diabetes, changes in plasma glucose and insulin were more favourable among those assigned to the Med-diet. A third group, made up of those instructed to follow a low carb diet, lost more weight to begin with, but weight regain was common. Those assigned to the Med-diet, lost weight and kept it off for at least 2 years.

Recently, Gabriele Riccardi and colleagues in Italy, Sweden and the United States conducted a 12-week randomised controlled trial to determine if a Med-diet incorporating low GI foods was superior to a standard Med-diet (4). All participants were advised to consume the same amount of carbohydrate (270 g/day) and fibre (35 g/day). One half of the carbohydrate was the same for both the high and low GI groups, including fruits and vegetables. The other half (135 g/day) came from foods with GI values less than 55 (the low GI group) or foods with a GI > 70 (the high GI group). The authors reported that post-meal glucose fluctuations were 35% higher after high GI meals and worsened over time, while indices of glycemic variability were reduced in the low GI arm. Changes in glycated hemoglobin (HbA1c) were similar in both groups.

Glycated hemoglobin is currently the gold standard for assessment of overall glycemic control because it predicts the risk of developing complications in people with diabetes. However, fluctuations in blood glucose are now known to be associated with increased risk, independent of glycated hemoglobin. The risks include lower sense of well-being and quality of life, higher inflammation and oxidative stress, factors known to be linked to cardiovascular disease. The ability to assess glycemic variability with continuous glucose monitoring devices gives us a window into minute-by-minute metabolism that we didn’t have in the past.

A low GI Med-diet may also be the best diet for people with fatty liver disease, specifically non-alcoholic fatty liver disease (NAFLD). This disease is currently the most common form of liver disease worldwide affecting all ages and ethnic groups, even in young people. Osella and colleagues from Southern Italy assessed changes in NAFLD score using ultrasonography in a randomised controlled trial lasting 6 months (5). The low GI Med-diet was found to decrease the NAFLD score within a short space in time.

So…. my take-home messages from recent research is that it’s possible to make a Med-diet even healthier by: