Home / May 2022 / THE OKINAWAN DIET: JAPANESE EQUIVALENT TO THE MEDITERRANEAN DIET

While the Mediterranean diet (Med-diet) is healthy and enjoyable for many, the eating pattern may not be ideal for everyone for a variety of reasons, including, importantly, food culture and traditional food preferences. People living in South-East Asia, for example, have traditionally enjoyed low fat, high carbohydrate eating patterns for millennia, and switching to a Med-diet is unlikely to be sustainable for them in the long-run. Luckily, there are other traditional eating patterns that share some of the main features of the Med-diet that are also healthy and enjoyable. One that may be less familiar is the traditional Okinawan diet.

Although it is well known that the Japanese are the world’s longest-lived people, less well known is that the longest lived of the Japanese are those that inhabit the southern most islands, known as the Ryukyu Islands (or Okinawa prefecture). Their longevity is thought to be mainly due to the fact that they are able to avoid or delay major age-related diseases such as cancer, heart disease, stroke, and type 2 diabetes. This in turn is thought to be related to a healthy lifestyle, including their traditional diet, which is low in energy (kilojoules/calories) yet nutrient dense, particularly with regard to vitamins, minerals, and phytonutrients (e.g., antioxidants and flavonoids).

It’s important to note that the staple carbohydrate is the sweet potato – not rice, as in the regular Japanese diet. Cooking styles centre around vegetables and tofu. Smaller servings of fish, noodles, or lean meats with herbs, spices, and a little cooking oil may accompany these staples. Nbushi style uses water rich vegetables such as daikon (radish), Chinese okra, and pumpkin; seasoned with miso; and simmered in their own juices. Irichi style uses a combination of simmering and stir-frying with less watery vegetables such as burdock, seaweed, dried daikon, or green papaya.

A traditional Okinawan meal would start with an Okinawan-style miso soup (water, miso paste, seaweed, tofu, sweet potato, and/or green leafy vegetables). The main dish is a stir-fried vegetable dish called champuru, which includes such vegetables as bitter melon (goya), accompanied by a side dish, such as konbu seaweed and konnyaku. This is typically simmered with a hint of oil, bonito dashi broth (for flavour), and small amounts of fish or boiled pork.

The meal would be served with freshly brewed jasmine (sanpin) tea, occasionally followed with a small amount of locally brewed awamori (millet brandy).

Therefore, the traditional dietary pattern in Okinawa may be characterised by its:

Many of these characteristics are shared with the Med-diet as described in this edition of Food for Thought, and as can be seen, the Okinawan diet pyramid is likewise similar in many ways to the Med-diet pyramid: 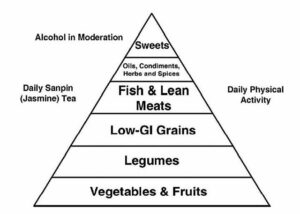 However, unlike the Med-diet, the traditional Okinawan diet is low in fat (27% of energy) and high in carbohydrate (85% of energy), in keeping with the very high intake of antioxidant-rich yet calorie-poor orange-yellow root vegetables, such as sweet potatoes. The Okinawan diet provides convincing evidence that there are many ways of eating well.

Dr Alan Barclay, PhD, is a consultant dietitian and chef with a particular interest in carbohydrates and diabetes. He is author of Reversing Diabetes (Murdoch Books), and co-author of nearly 40 scientific publications, The Good Carbs Cookbook (Murdoch Books), Managing Type 2 Diabetes (Hachette Australia) and The Ultimate Guide to Sugars and Sweeteners (The Experiment Publishing).
Contact: Follow him on Twitter, LinkedIn or check out his website.